My oh my, what a vacation this was, my first ever 2 weeks off. I needed it so-o bad, I can't begin to tell you. And I certainly took advantage of it, as you'll see below. I visited so many places that I can't list them all, but you can bet I remember every last dirt clod!

My goal was to end up in Austin TX to deliver a hand-built computer for my old Marine buddy Eric (the musician), but since I needed more than just a long drive to clear the electrons outta my brain completely, I mapped out a lot of different places before I left that I've always wanted to see. I took a round-about way to TX and put almost 5000 miles on my butt, but I got to see everything I wanted to, and much more. Take a look... 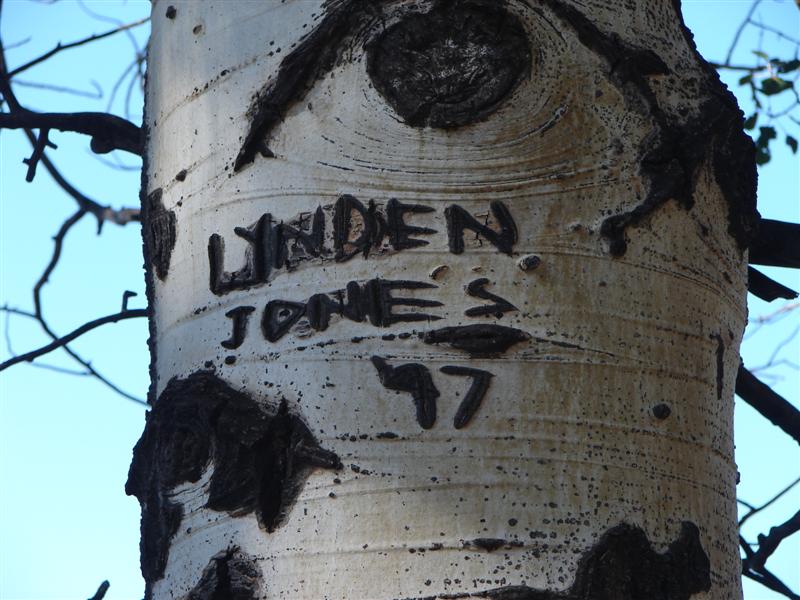 This Aspen tree, which I found on top of Zion NP in Utah had the oldest carving date of all of the initials, but there were thousands upon thousands of them for miles. I must have driven through that section at 10 miles per hour checking them all out. 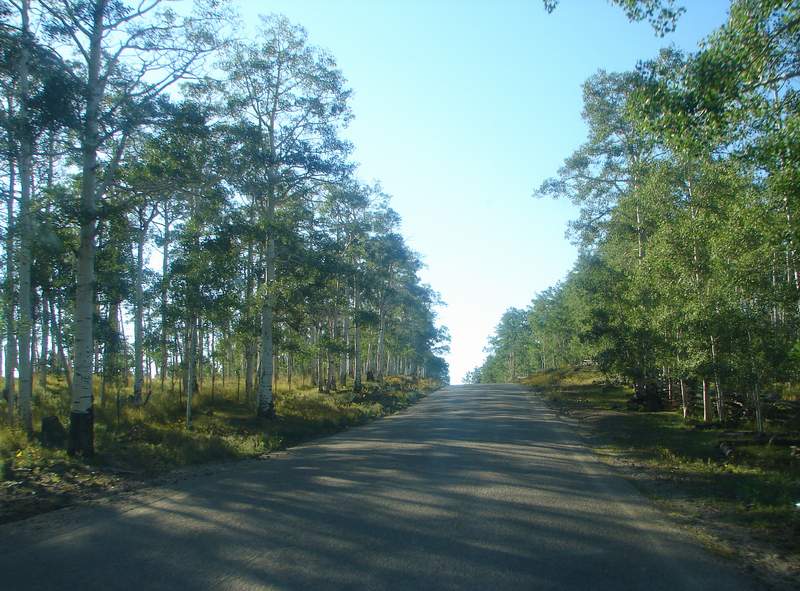 This was the Aspen forest that had all these carvings (previous picture), and the first pure Quaking Aspen forest I'd ever seen. When the wind picked up, the sight was stunning, and I just HAD to spend the night amongst them. It was chilly in the morning, and I was probably camping on private land, but at least there were no people around (except one rancher that gave me a dirty look, wondering why I wasn't down in the national park like the rest of the fools). 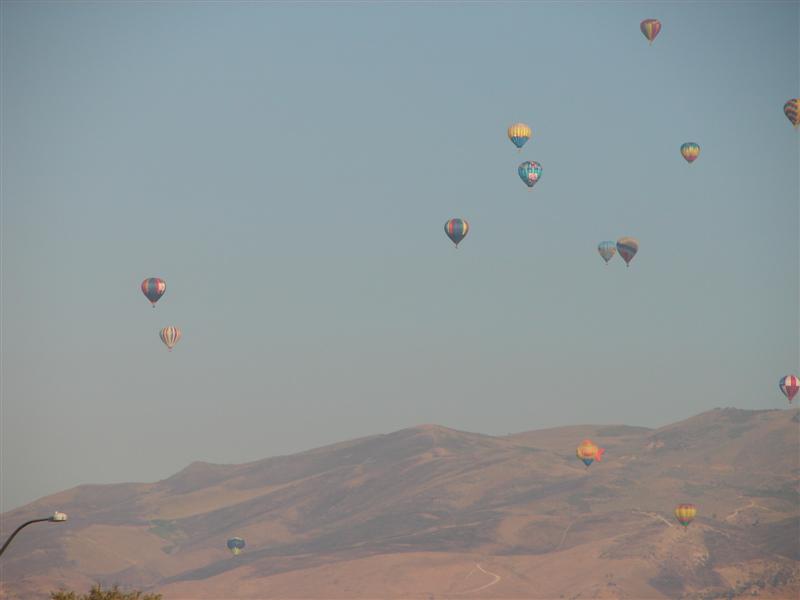 I stopped by Reno on the way to see a Stanley Clarke/George Duke concert, and I woke up early to catch the annual Reno Hot Air Balloon race. Much better in person, but too early for my taste (I was on vacation, dog gone it!). 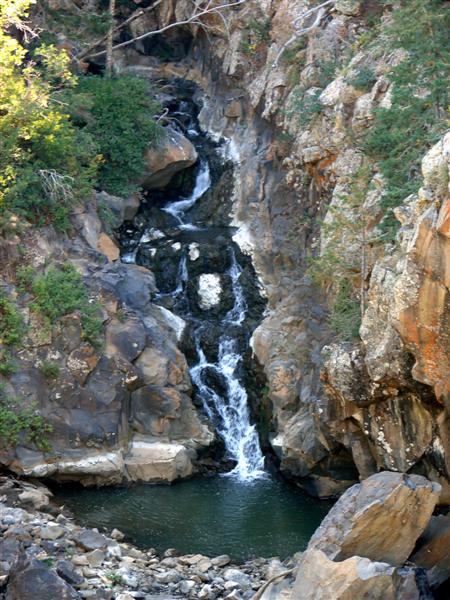 This beautiful and private little falls was cascading down the very beginning of Zion canyon, and I would have never seen it had I taken the default tourist route through the park. I was up there alone, and I cherished it. The canyon just collapsed into the ground from a flat plain up on the edge of the Colorado plateau and I would have missed it had I been driving faster. 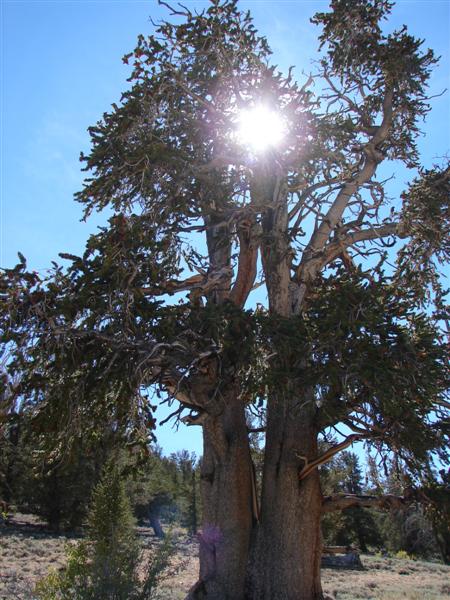 This ancient tree lives in the protected Bristlecone Pine forest in Inyo county (close to Bishop) and is ONLY a thousand years old! There was an entire grove of them, and even more further into the park. The oldest was called "Methuselah" and is 4,767 years old! Incredible, a tree older than the pyramids. Good thing the Bristlecone forests only grow at 9000 feet and above or somebody would have cut them down by now. This would have been a very reverent place if it wouldn't have been for the 2 dozen tourists showing off their Northface equipment all over every trail. They oughta let us reserve time in these special places so we don't have to deal with so many people. It really detracts from the holiness. But that's just me, I guess. 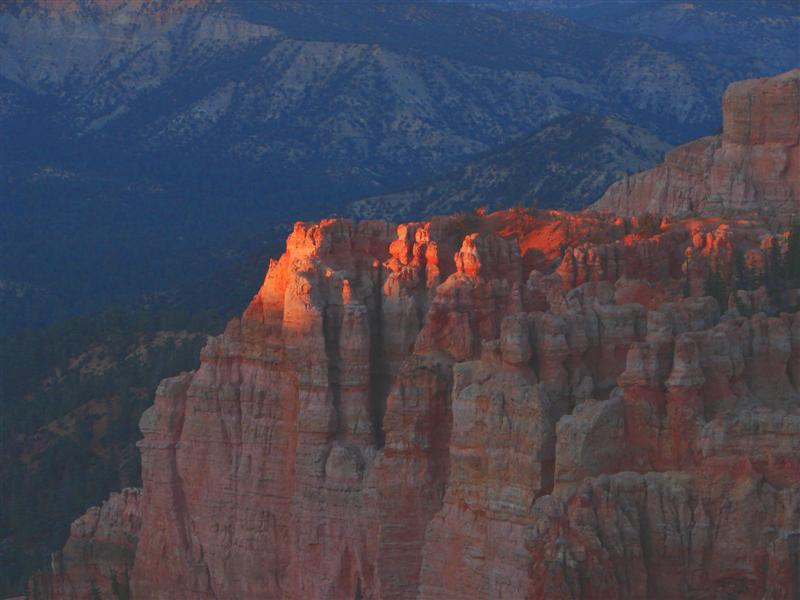 I camped in the campground inside of Bryce NP, my tent pitched not 50 feet from the next campsite, which killed me. But it was only minutes from Sunrise Point, and I was rewarded for my tolerance by a thousand views like this (yawn). And there were only a few people up that early! 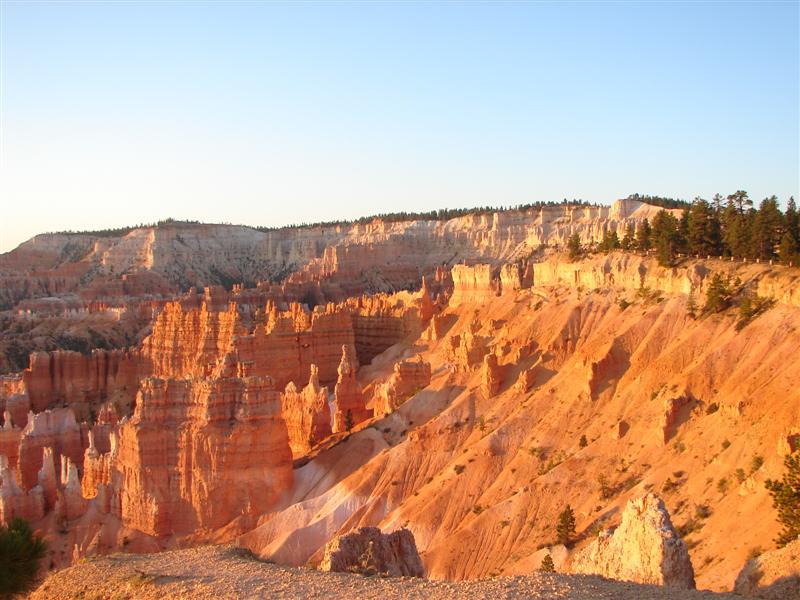 Another spectacular view of the Bryce hoodoos at sunset. The pictures don't even come close. It was so reverent no one was speaking a word, just awe-struck silence from all. Views like this in all directions were more than enough to ignore the cold winds, but a coffee vendor could have cleaned up! 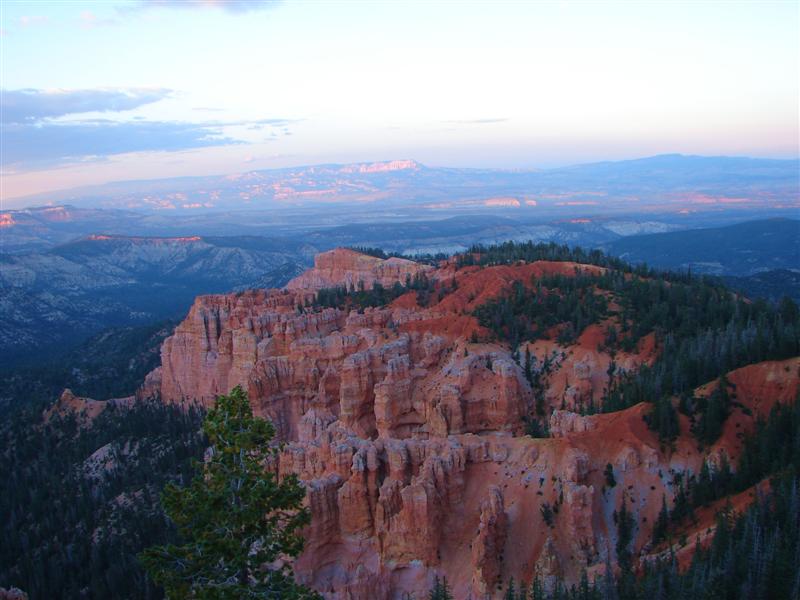 This photo was taken at sunset in Bryce NP, but I guess I just didn't time it right. Still beautiful nonetheless. 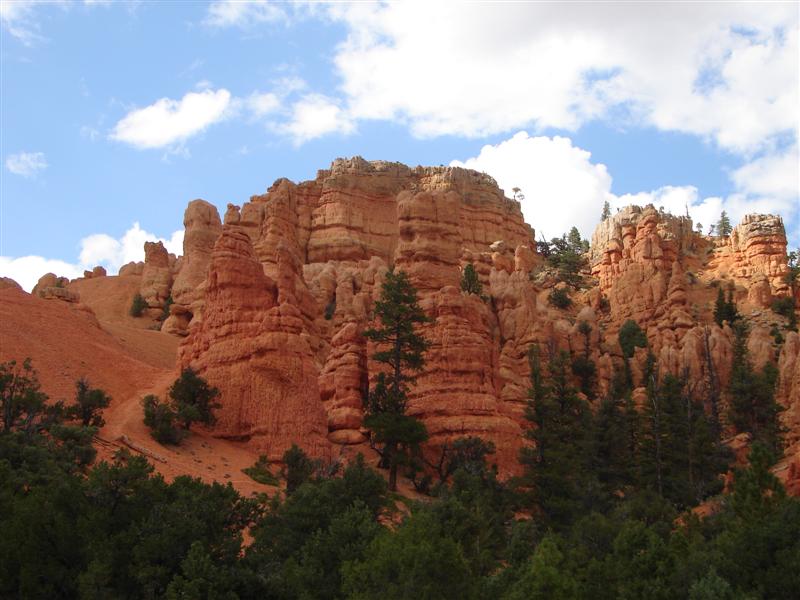 Another Bryce photo taken from below. You could pull over and walk right up to these amazing formations, and you can bet I did. My clothes looked like I was a miner by the time I left that park. Pink limestone is what creates these beauties. 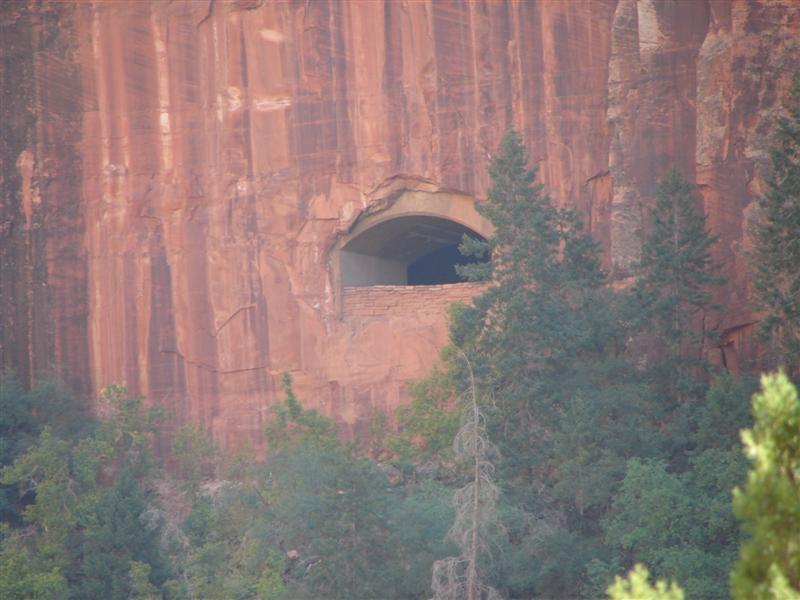 Man, this tunnel cutting through the sheer face of the rocks between Zion and Bryce was a tribute to mankind's industriousness. One mile long and a hand-cut road leading to it, it was as amazing as the natural features. And this was way up above the valley floor, too! 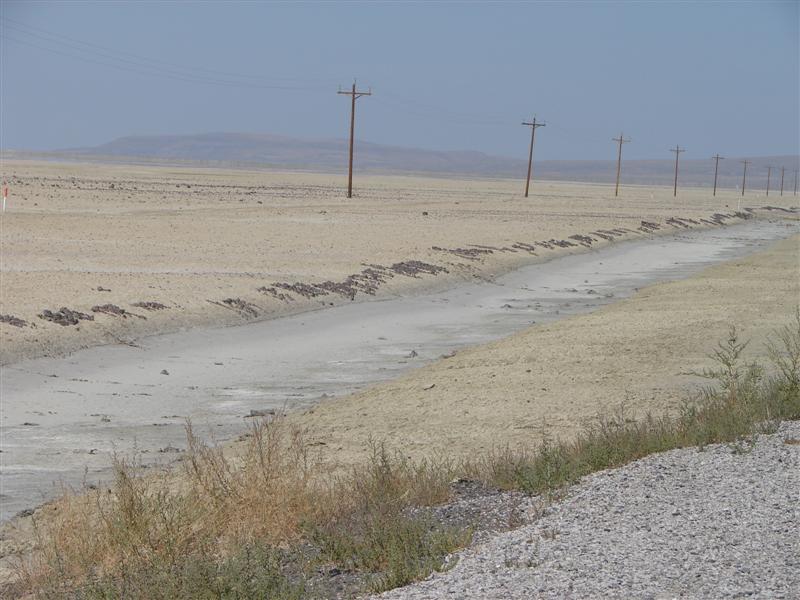 I can't even remember the highway this was on (50, maybe), but it was a typical Nevada drive, straight and boring. But these hand-placed rocks were actual words that folks had stopped and created on the side of the road. Mostly names and dates, but I found a lot of slogans, too. And they went on for probably 30 miles! There must have been a million of these creations, and there was no telling how long some of them had been there. On this desolate and lonely back road in the middle of nowhere, miles from any town. Ain't America grand? Finding things like this just inspire you. 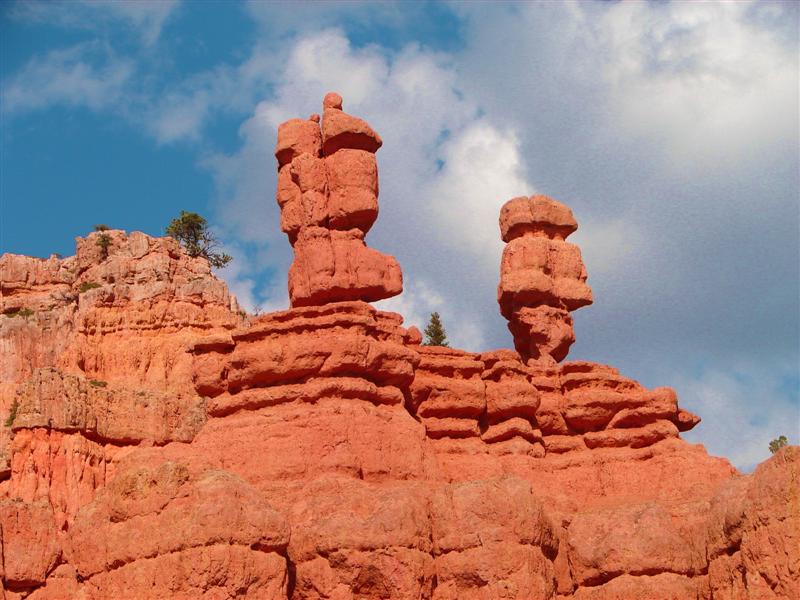 More impressive hoodoos from Bryce. The color was just right at that time of day. Don't you wonder what's on top of those stacks? 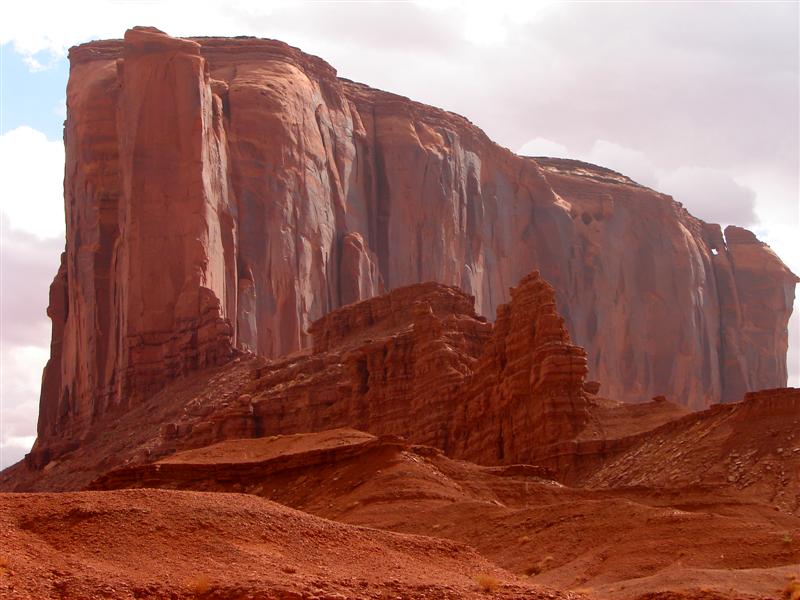 This was one of many striking formations in Monument Valley NP, and again the pictures just don't give you a clue as to the feeling you get when you walk up and touch one of them. I am sure that the older indian tribes found them sacred, but the ones that I met there were only using them to glean money from us all. I could be wrong, but I doubt they held them in as high regard as the tourists did. 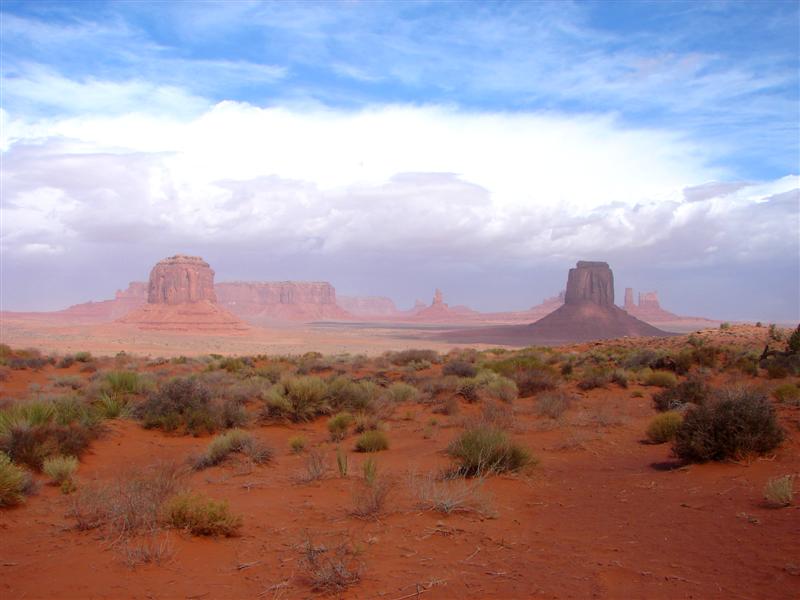 A dust storm started picking up as I meandered through the valley, and it eventually chased me out of there. That, and the lightning strikes hitting the ground from the nearby thunderheads moving my way. The word Grand was created in this valley when it was added to the English vocabulary, I'm sure of it.

Another shot of the Quaking Aspen forest above Zion. You can tell I was mesmorized. Note the hand-built structure created, no doubt, by a strong pioneer a hundred years ago that was on his own up here at 8000 feet. John Muir would have loved this place. 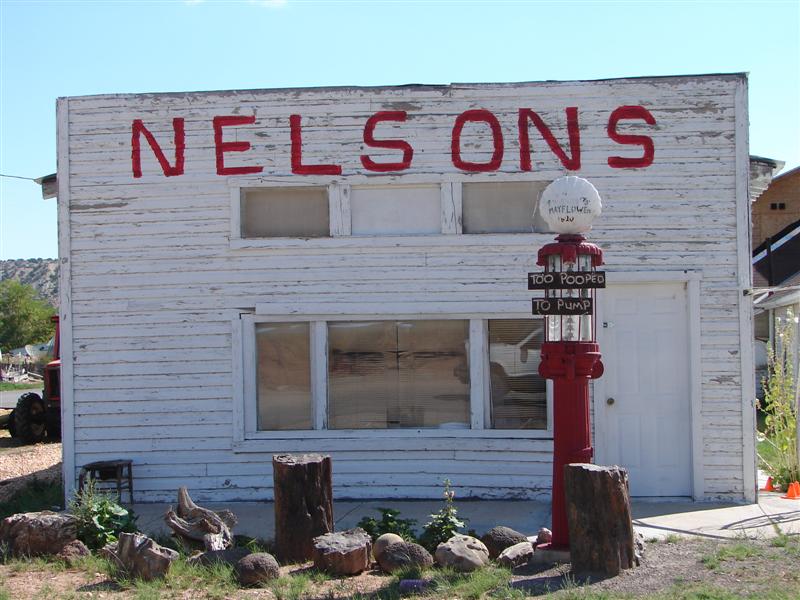 This gas station made me smile as I passed through the Grand Staircase NP in southern Utah. With gas prices at their current high, I'll bet the owners are considering an upgrade. I saw lots of barely-standing buildings that had a modern gas pump all over the states. 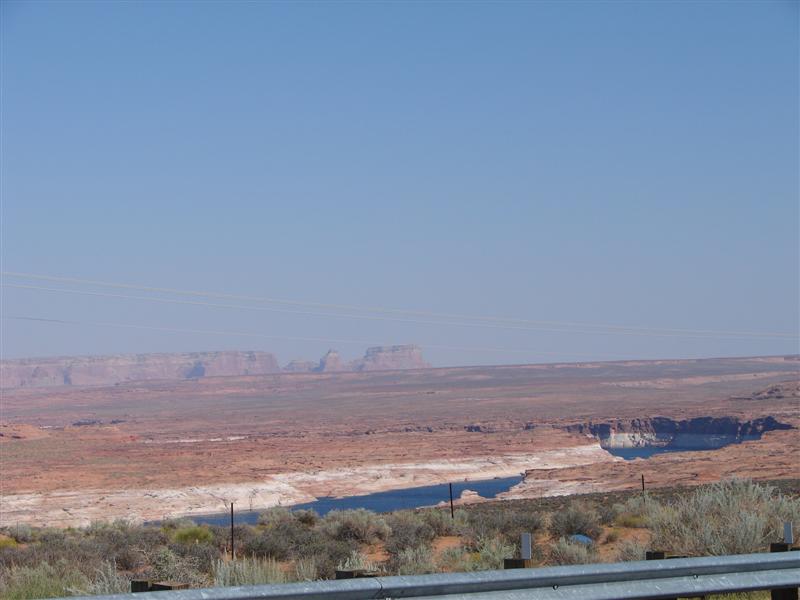 Hard to see, but this is upper Glen Canyon and the Colorado river, and the Grand Canyon starts right in front of those far mountains. The tremendous effects of what erosion can do in the sandstone plains around there is truly unbelieveable until you see it for yourself. 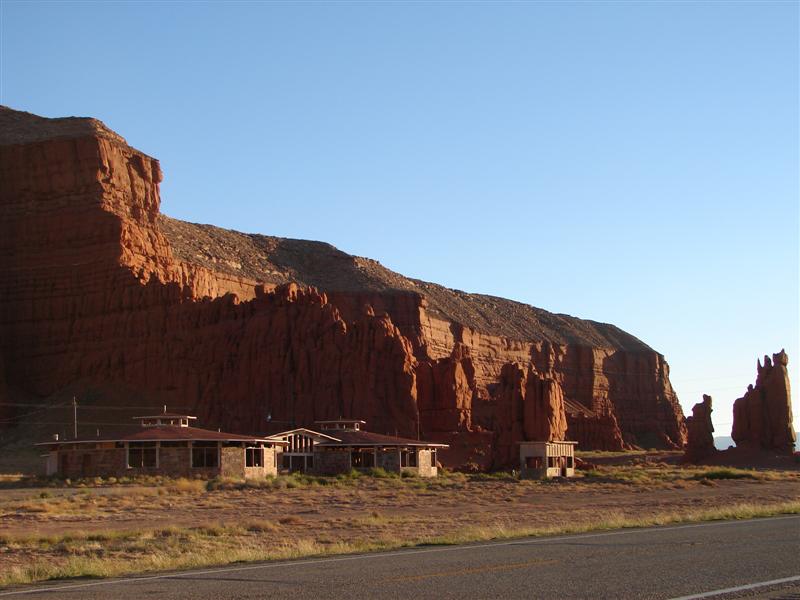 This neat old formation is around Monument Valley, and it was quite conspicuous. The Navajo had built these great and expensive round-houses that looked like they were never quite finished, or at least never used. Anyway, the rocks were great! 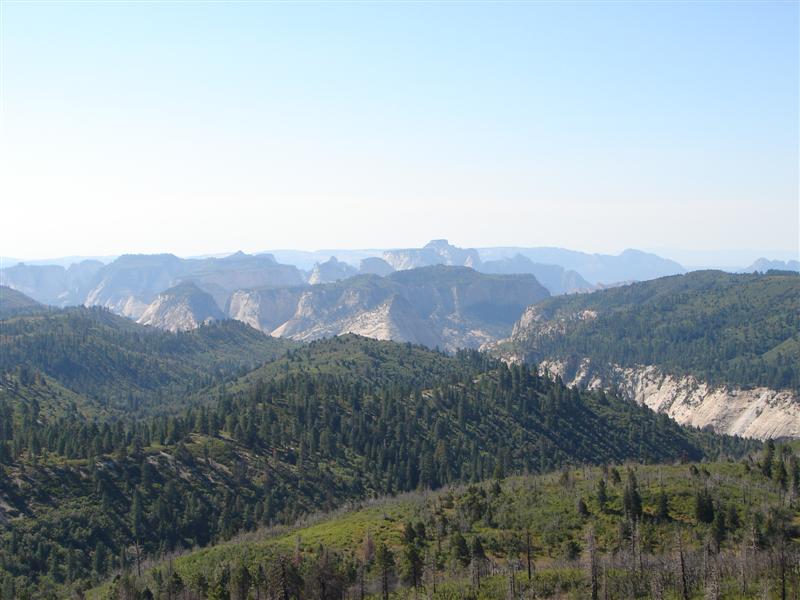 And this is a view of Zion canyon from above, before you get to the touristy stuff that the Park service loves to channel you into. Hardly anyone ever sees this angle from the looks of the tracks on the 25-mile-long dirt road I was traveling. Oh, if they only knew what they were missing. Maybe it's better that they don't. 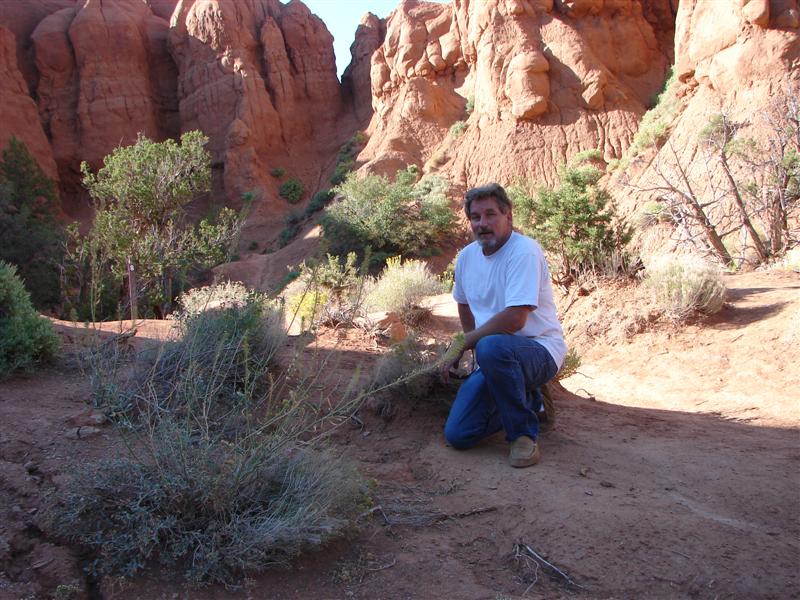 Out of breath and limping all the way, there was a newly-discovered (1987) arch in this area of the Grand Escalades that I just had to see. The lizards were HUGE around here, so huge I thought about riding one back to the truck. If you wanna see the arch, you gotta go there yourself!

I can't believe that I didn't even look at my e-mail or cell phone for the entire trip, and I was proud of myself for it in the end. The worl didn't fall apart as I had suspected it would, and the time away helped me gain back the much-needed perspective that was so quickly dwindling in the previous months before I left. Seeing some old friends was an added perk, and I'm already thinking about next year's trip! I can see the importance now of just getting away for more than a week periodically. So, anyone viewing this page, please e-mail me with some other locations that you think I've just gotta see.